Chief Kudron is pleased to announce that Shavonte T. Thompson (DOB 02/16/1992) has been arrested for the homicide of Javier Hall, as well as an additional shooting incident that occurred in the City of La Crosse in March of 2019.

On 01-10-2020 La Crosse Police were notified by the US Marshals Service in Peoria, IL that they had taken Thompson into custody.  According to the Marshal Service, they along with the Peoria IL Police Department were conducting surveillance on a residence because information was developed that Thompson was there.  While conducting surveillance, they observed a subject they believed was Thompson enter the residence.  As they attempted to make contact, Thompson tried to flee out of a window.

Thompson was ultimately taken into custody and has been taken to the Peoria County Jail where he is currently being held.  This remains an active and ongoing investigation.  No additional information is anticipated to be released until next week.

The La Crosse Police Department wants to take this opportunity to thank the US Marshal Service, the Peoria Police Department, and the Wisconsin Department of Justice for their assistance in locating and apprehending Shavonte Thompson. 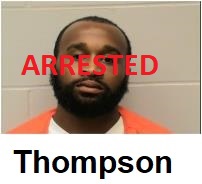