With repeated trips over a pavement, small hairline cracks develop into larger, visible cracks which eventually separate giving water a path to travel into the road base.  Cracks can also be caused from age, expansion and contraction due to freezing and thawing. Water is the "enemy" of good pavements and can worsen cracked pavement problems. Under good conditions water will run off the pavement into a gutter or ditch and quickly drain away.  In cold climates an additional problem arises due to the freeze/thaw cycles that occur.  The water in the pavement and road base freezes and like a bottle of pop left in the freezer, it expands and pushes the pavement apart.

Steps to a Pothole

The illustrations below explain how a pothole forms.

Potholes begin after snow or rain seeps into the soil below the roads surface.

The moisture freezes when temperatures drop, causing the ground to expand and push the pavement up. 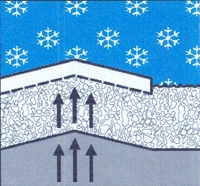 When vehicles drive over this cavity, the pavement surface cracks and falls into the hollow space leading to the birth of another pothole. 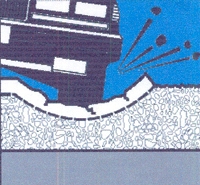 If you notice a persistent pothole, please call the location into the Street Department at (608) 789-7340.  Do not hesitate to report a pothole more than once, since they can open up again quickly after being filled due to the repeated traffic over the hole, snow melt runoff, and changing temperatures.